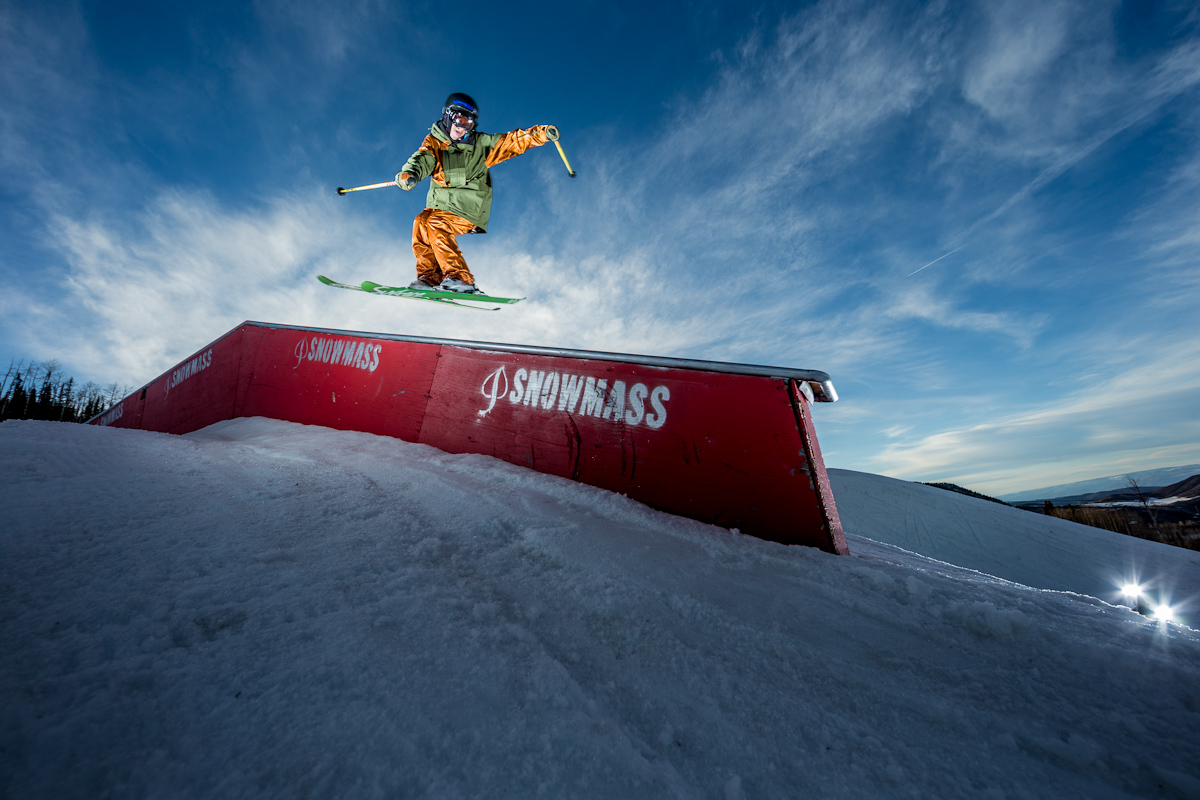 Hi all, last week I had the joy of working with a slew of new Canon gear on the ski slopes of Snowmass, Colorado–and wow was it all exciting! The new 5D Mark III and 1D X are truly incredible cameras. The features I am most excited about are the new 61-point autofocus system in each camera; suffice it to say that the autofocus in the previous 5D Mark II was, well, barely passable for shooting sports or backlit subjects. The new autofocus system ROCKS — I have been blown away by how fast and accurate the focus is, even when the sun is screaming into the lens, or in dim dusk light.

I also want to give big kudos to the Canon gear team for keeping the megapixel count relatively low on these full-frame-sensor cameras. In my opinion this is the single most crucial feature to enabling us to shoot in low light, and to keep noise down. That’s the reason why I’m just thrilled with the 1DX’s 18mp sensor. In our tests with both stills and video, the 1DX literally sees better details in low light than the human eye; it’s kind of like having a night vision sensor. Likewise, I’m glad Canon didn’t raise the megapixel count with the new 5D Mark III; 22mp is more than enough for our clients, even those wanting billboards etc; and this sensor allows us to easily shoot commercial-grade images at ISO 6400 and even beyond.

Anyway, I digress. What I want to share are some photos from our shoot last Friday! As part of an upcoming instructional video series on the new wireless 600EX-RT Speedlites and the ST-E3 transmitter for Canon’s Digital Learning Center, we photographed a dozen top skiers and snowboarders from the Aspen Valley Ski & Snowboard Club at the legendary Snowmass Terrain Park. See below for a behind-the-scenes video directed by our producer, Kate Rolston, followed by the photos. 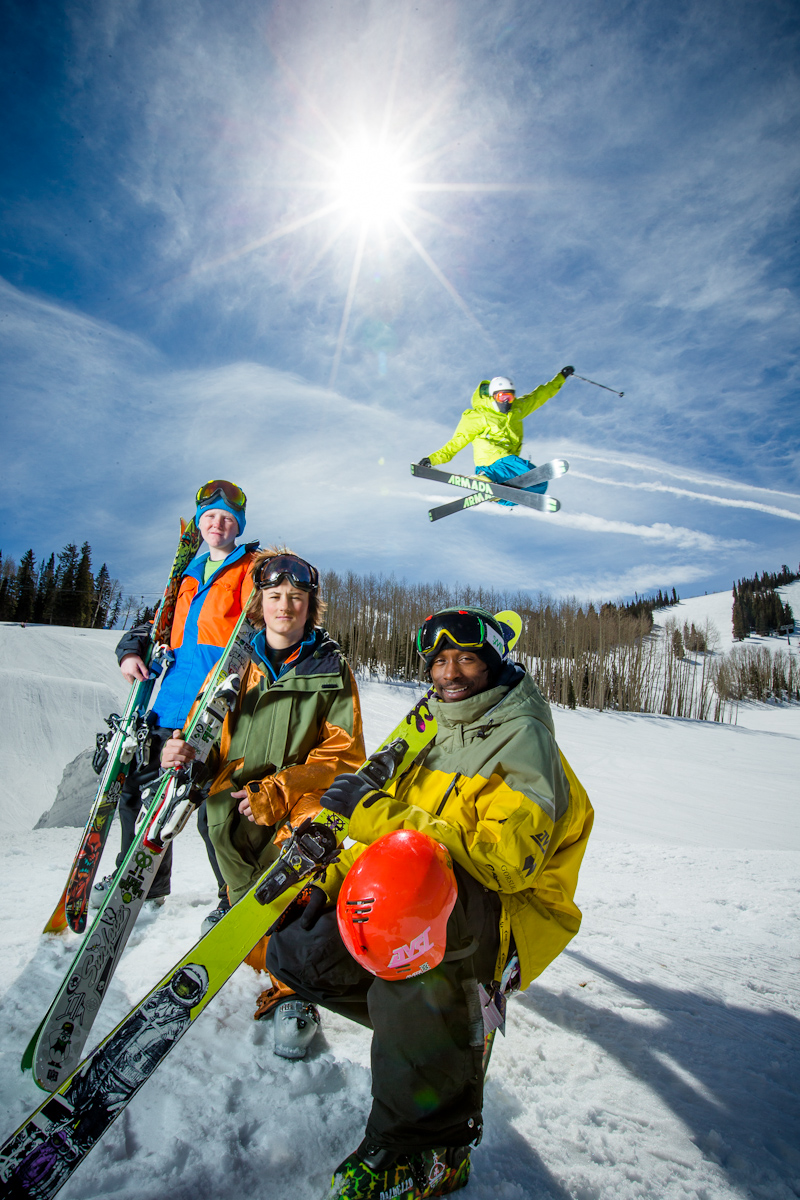 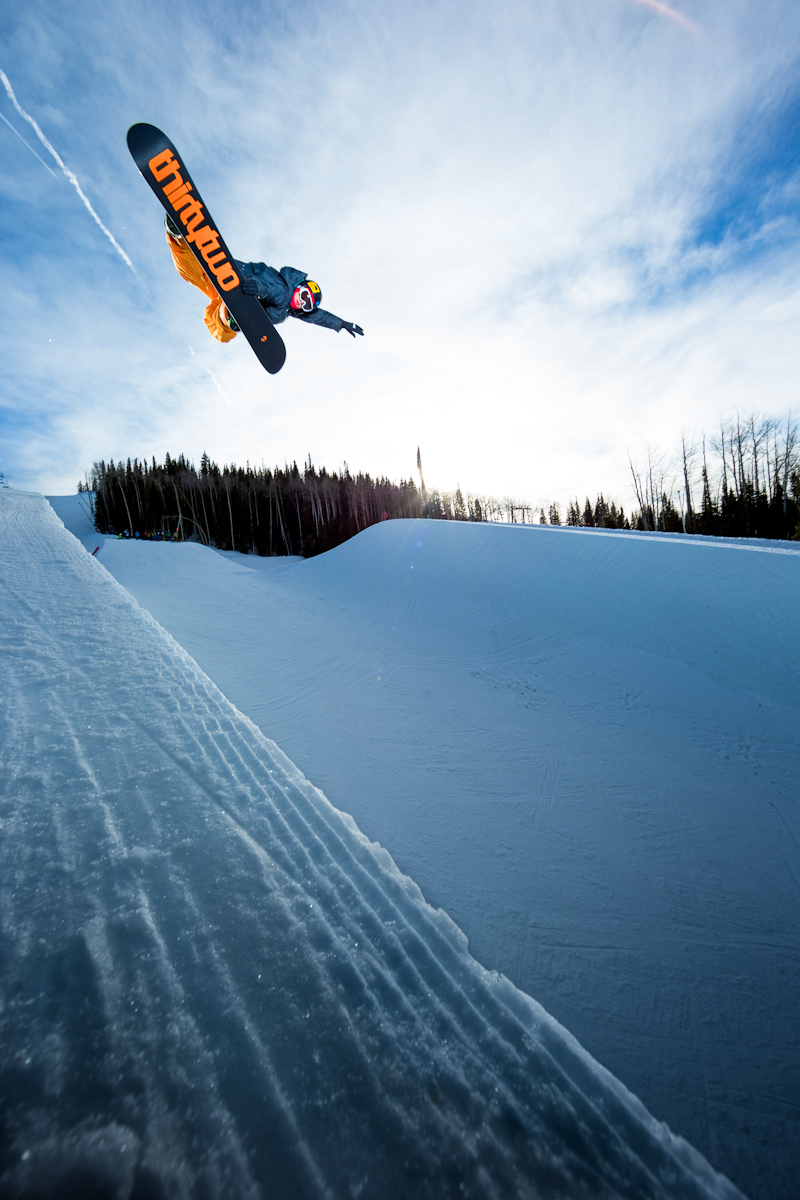 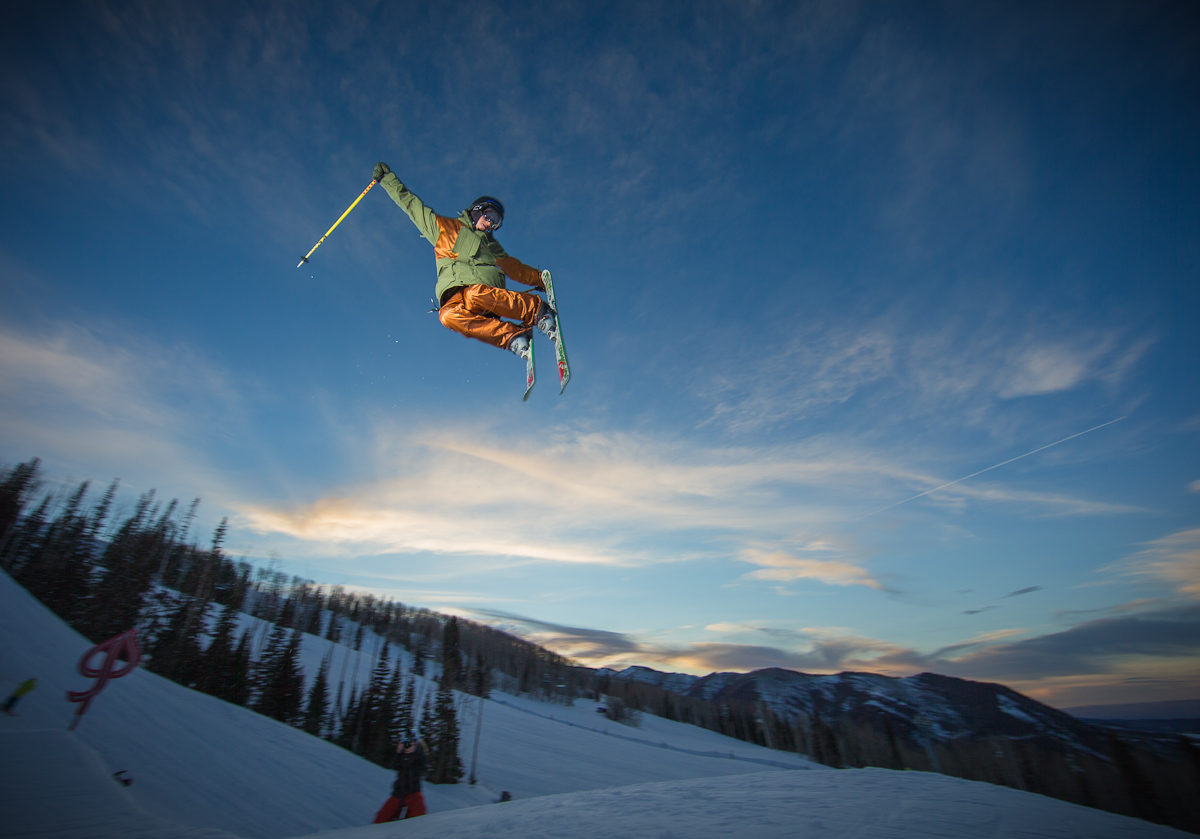 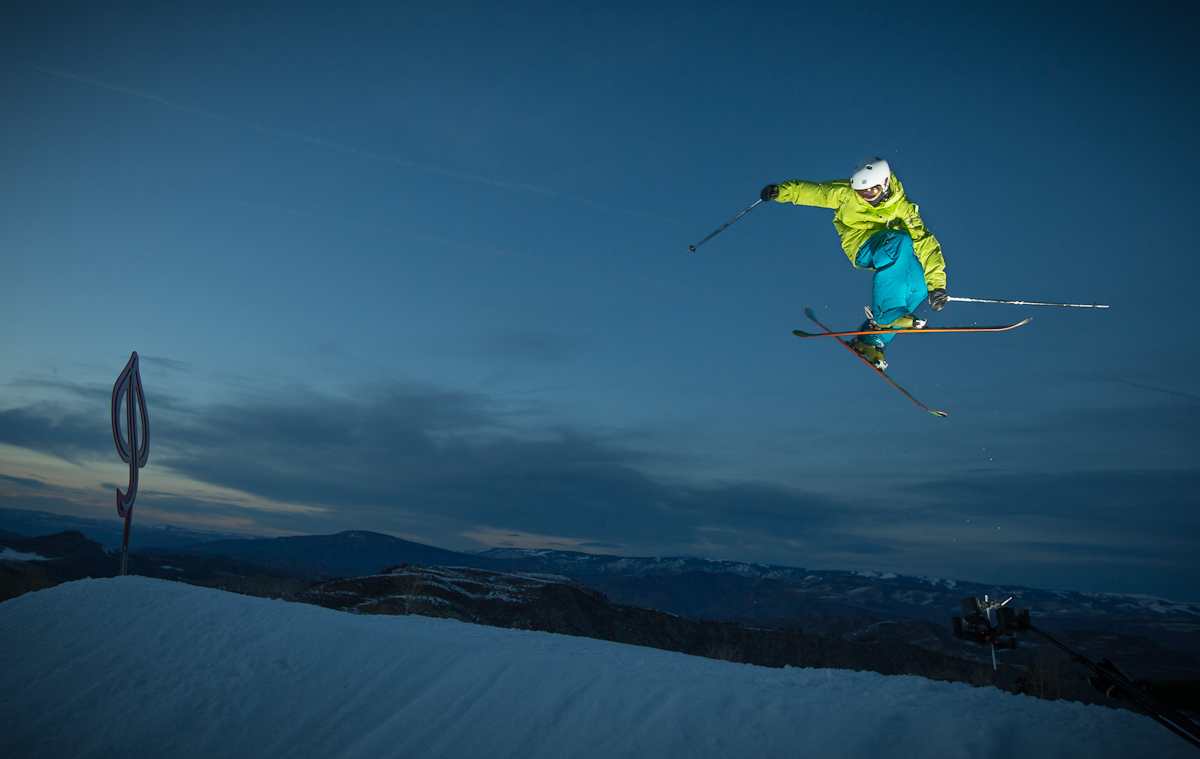 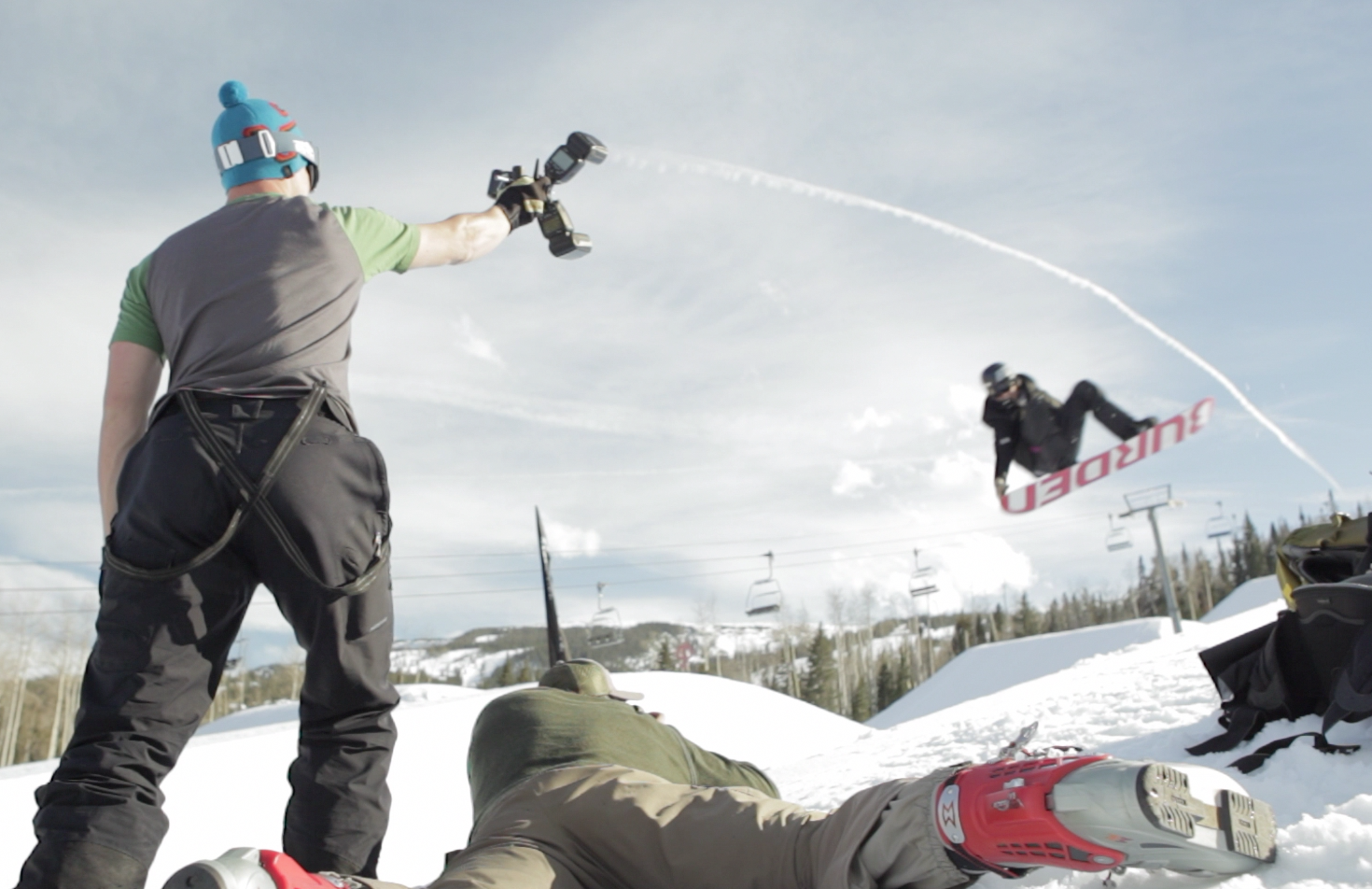 As for the Canon gear, we used the 5D Mark III and the 1DX as our cameras; and we even flew a 5D Mark III on an RC helicopter overhead, chasing the skiers down the jumps. Another big improvement is that the rolling shutter/jello issues from the previous 5D Mark II is greatly reduced in these new cameras; no small feat …

These new Speedlites are amazing! They work on radio signals rather than the previous generation’s infrared signal; so they no longer require a line of sight to fire, and also work in blazing sunlight (the previous infrared signal worked poorly at best in bright sunlight). The ST-E3 transmitter can fire up to 15 Speedlites in 5 different groups, any of which can be operated in manual or ETTL mode or any combination thereof. The working range is easily 100 feet. The ETTL capabilities were amazing (and I’m not just saying this to promote the Speedlites, promise) — when we were shooting straight into the sun, with skiers jumping toward us in the halfpipe, the ETTL metering was more accurate than our manual-mode calculations. We placed the Speedlites in a bunch of positions, and even ganged 3 or 6 together using the IDC Photo Video “Triple Threat” Speedlite mounts and the Westcott 7′ Silver Parabolic Umbrella to easily overpower midday sunlight.

Another new feature on the Speedlites is the 200mm zoom setting; essentially this features lets you focus the light into a narrow, concentrated beam that gives you and extra stop or two of working light. That’s a big deal when trying to milk the most amount of power out of these portable lights.

The biggest disappointment? Packing all this new canon gear back into the box and returning them to Canon this week. (Believe it or not, as a Canon Explorer of Light I still buy all my equipment; I have ordered all of these items though!)

We are madly editing the video feature this month and will post it on Canon’s Digital Learning Center as soon as possible. In the meantime, here are some sample images from the shoot. We processed the raw files in Adobe Lightroom 4 and exported them as web-size jpegs. The first 5 shots were taken with the 1DX and the next two with the 5D Mark III. We didn’t do any cloning/compositing on these shots, and you can see some of the Speedlite groups in two of the shots (an easy retouch if/when we want to remove them).

A big thanks to Melissa Rhines, Yannick Rioux and the Aspen Skiing Company for making our shoot at Snowmass possible.